Pedophilia and Ephebophilia - What's the difference? 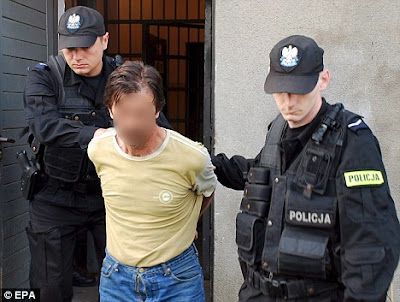 Today's topic will address whether chemically chopping willies off is appropriate for people like Austrain pedophile Joseph Fritzl and the recently caught, unnamed ephebophile coined the Polish Fritzl, amongst the rest of society's most hated of criminals. I decided to post and expand part of my recent comment on Beatroot's blog, who addressed the issue without differentiating what is the difference between a pedophile and an ephebophile.

Not that technicalities matter much to the poor abused daughters of the Polish or Austrian Fritzl, but technically speaking the Polish father did not perpetrate an act of pedophilia as has been put across by the Polish Prime Minister Donald Tusk, who supports chemical castration for the sexual abuser.

Due to the fact that the victim was 15 when the abuse started, the actual sexual relationship, removing the non-consensual/familial aspect from the equation, is technically called ephebophilia/Lolita syndrome/phebophilia/hebephilia. It is clinically not a paraphilia due to the fact that it involves post-pubescent attraction/preference/timing, as distinct from an adult choosing a pre-pubescent to abuse, which is technically pedophilia (usually abusers target 5-7 year olds in this case. Infantophilia is the technical term used to describe the much rarer adult paraphilia of attraction/abuse of those under 24 months).

However, the distinctions are important, because given that the age of consent is 15 in Poland, and the fact that the daughter/mother may not be in a mental or willing state to give testimony against her father/husband, the perpetrator may not get such a colossal sentence as one would imagine. He committed incest, statutory rape and he should be brought to justice. But he is not a pedophile, and clarification around this should be asserted by the media. Unfortunately, they just parrot what leading figures say without correcting them.

If the government is to consider introducing chemical castration for ephebophiles then there will be a lot of people quaking in their boots. Will they employ the same or different criteria to an 18 year old going out and sexually with a 14 year old? He is technically an ephebophile, but to use the terminology employed in Poland regarding the Polish Fritzl case, one could easily be put into the pedophile category. True enough, an under 15-year old cannot give 'informed consent' and her hypothetical 18+ year old boyfriend would be exploiting her in the relationship.

The ages of consent throughout the world can be viewed here:
http://www.avert.org/aofconsent.htm

So there is certainly nothing universal in terms of age of consent. Here in Ireland it is still 17. More conservative countries usually max. out at 18. I read recently that the Vatican State officially has it at 12! Is that true? And I'm not joking.

We now have a case of the western media and politicians misdiagnosing those who abuse or have a sexual preference for post-pubescent teens. The mistake is not semantic but can unfairly tar some people for life if not clarified publically.

So what is my position on chemical castration. Hmmm, well if the perpetrator is caught, as the two above photographed have been, then it's too little too late really. The notion of justice should be about ensuring that they do not have access to children or teens again where they can carry out such abuse. Open prisons that have mandatory counselling services may better serve society.

Nobody has mentioned the fact that clinical therapy has a high success rate in preventing sexual abusers from acting on their impulses. This was well documented by actor Kevin Bacon in the film The Woodsman. So how about we try invest more in therapeutic services to deal with the issue rather than getting the chemical blade out of the cupboard to punish these sick men?
Email Post
Labels: Age of consent Ephebophilia Joseph Fritzl Pedophilia Polish Fritzl
Reactions:

Anonymous said…
It is imperative that the correct terms be used properly. I find that if one has the urge to have a sexual relationship with a post-pubescent teenager that he/she seeks help or risk the consequences of their actions. Which raises a question, does love or the sense of being in love have an age?
1:45 am

Damien Moran said…
I've read in numerous places that it is 15. My wife thought it was 16. A documentary on Fritz was just on TVP1 - Joseph Fritzl: Potwór z Amstetten. Seemed pretty shite.
11:01 pm