Damien Moran recalls his participation ten years ago in damaging a plane at Shannon Airport, the three resulting trials, his group's unanimous acquittal and life since being in the dock. 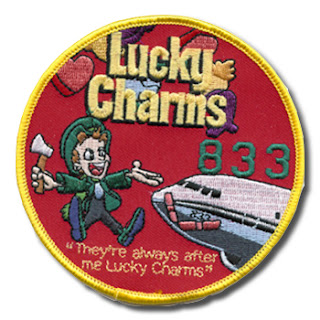 10 years ago, at 4 am on Feb. 3rd 2003, four colleagues and I were crawling Full Metal Jacket-style through drenched, muddy grass inside Shannon Airport's perimeter fence, saturated to the bone. I had a hammer and small boltcutters in my jacket pocket. 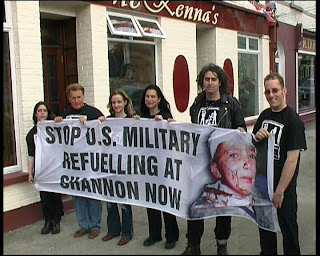 Within 20 minutes my four colleagues (Deirdre Clancy, Karen Fallon, Nuin Dunlop and Ciaron O'Reilly) and I had broken into a hangar housing a US Navy C-40A Clipper logistics plane, bound to support preparations for the Iraq war. We laid a commemorative shrine before causing 2mn Euros damage to the militarised Boeing 737.I was a seminarian then, with the Holy Ghost Fathers, a wannabee missionary on the production line for celibacy, obedience and poverty. A meat-eater, a teetotaller, a Manchester United supporter. I even had hair.

The odd mix of student priest-peacenik jailbird ended up as an RTE documentary. It was my last ego-trip and an intentional post-trial opportunity to rev up tension about more protests to come, even though I knew our group were a spent force and the anti-war movement was all but dissipated.

As I write this, it's 4am, February 3rd 2013 and I just got a kick in the jaw by my two year old daughter, Mia. She's finding it hard to settle down tonight. I changed her nappy and sang her the ABCD song six times in a row before she nodded off. At last, time for me to nap.

There goes Emma. She's been grunting and farting for the past twenty minutes and seems a bit blocked up. I better get the suction pump and get them snots out. She's just a month old, so I guess I gotta give her a break. I can sleep when I'm retired.

Life has changed a lot since making headlines around the country – for all the wrong reasons, according to many friends and foes. Wipes, nappies and soothers are the tools of my trade now. Dorota and I decided to settle in Warsaw once the trials had finished and I was free to roam.

I've left the church, and God behind. During Lent I became vegetarian in Limerick prison. The beef didn't look so appetising – maybe there were some Polish horse trimmings in it.

Wikileaks release of diplomatic wires some years backs showed how Foreign Affairs Minister of the time, Brian Cowen, predicted to the US Embassy that the peace movement would collapse once the war started. It was one of the rare occasions when my fellow Offaly man was spot on.

Bertie Ahern claimed our actions could have caused the meltdown of the mid-west economy. He was wrong. In the end, his own party proved very capable of achieving this. Government officials and the media said the Irish taxpayer would foot the bill. This also turned out to be unsubstantiated hype. Generally speaking, the peace camp and protests were causing a political shitstorm and consequently faced a major crackdown by all wings of the State.

So, let me sum up 3.5 years on bail and on trial. Well, I should start with the daily then weekly signing on at the police station. I used to arrive at the Garda station at 11.55pm, sign on, wait 10 minutes, then sign on again. So instead of seven visits, four sufficed. Three of our group were from Scotland, the US and Australia, so obviously being unable to return home for so long was problematic. We were barred from County Clare, - yeah, the whole county - and seen as personae non-gratae within 1 km radius of the US embassy, I found motorbike helmets are a great disguise.

Our first trial, two years after the action and voluntary arrest, ended when the judge accepted arguments from our barristers of his 'perceived bias'. The jury were discharged, the media gagged.

The second ended in more dramatic fashion. As the jury were out for final deliberation after hearing two weeks of testimony, we received reliable evidence from a source in the US that our presiding judge had attended George Bush Junior's inauguration, invited by none other than disgraced Republican Tom DeLay, who has since been sentenced to three years imprisonment on felony money laundering charges.  The trial collapsed when the judge accepted the evidence was 'half true, half false'.

Our third trial, in July, 2006, resulted in a unanimous jury acquital – the first and only time in the history of Republic of Ireland.

We had successfully convinced a random selection of Dublin jurors that we acted in line with Section 6(2) of the 1991 Criminal Damage Act, that we had a lawful excuse to “damage… the property in question… in order to protect himself or another or property belonging to himself or another… and the act or acts alleged to constitute the offence were reasonable in the circumstances as he believed them to be”.

One month after our acquittal, inspired by the positive outcome of our case, six Derry anti-war protesters destroyed property belonging to US arms company Raytheon in protest against the Israeli war in Lebanon. Two years later, in 2008, they were acquitted.


Our group members, inspired by non-violent anarchism and the Catholic Worker movement, have since long gone our separate ways, yet we have always remained firm in the belief, similar to them Dublin jurors, that our actions were justified legally and morally.

We received massive support, from gigs to letters in jail. You know who you are and it was great to be together during the whole process. Life-long friendships and activist bonds were nurtured.

Today, just a dozen activists will commemorate the victims of the Iraq war at Shannon Airport, US soldier cannon-fodder included, of which over 100,000 still pass through Ireland annually.

So, when you reel back the years, knowing what we all know now about the Iraq war, do you think the Shannon 5 were justified in turning swords into ploughshares at Shannon Airport? 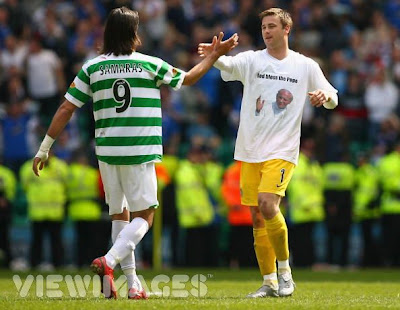