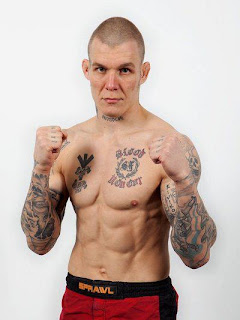 A Finnish Mixed Martial Arts competitor, due to fight next month in Dublin, has had his invitation withdrawn by the event organiser due to his strong links to the notorious Neo-Nazi group ‘Blood & Honour’.

Outraged anti-fascist activists initiated a campaign around the issue and by Monday evening Celtic Gladiator, due to the 'controversy' surrounding Niko Puhakka's inclusion in the Citywest hotel event in Saggart, Co. Dublin on February 9th, pulled the far-right extremist from their line-up.

Anti-Fascist Action Ireland had appealed to their support base over the past few days to contact the host and organiser and demand they exclude the controversial Scandinavian fighter and his fans, for fear they would use the occasion to promote their political-leanings and cause trouble. He has recently being banned from fighting in Poland and England.

A statement released Monday night by the Board of the organiser stated:


Due to the controversy surrounding the fighter Niko Puhhaka, the organisers of Celtic Gladiator decided to cancel the fight that was scheduled to take place on 9 February at the Citywest Hotel in Dublin. Celtic Gladiator have signed the contract with Niko Puhakka basing only on his performance and achievements in sports. We as an organization do not judge our fighter by race, color, religion or beliefs.
Unfortunately, the amount of negative feedback regarding the fighter forced us to make a decision of removing his name from fight card. This, however, does not mean that the fighter Wesley Murch will not appear on the event, he will be assigned a new opponent shortly.
Since 2002, the 33 year old Puhakka has been sponsored by the infamous US clothing firm Hoelzer Reich, who have close ties to the white supremacist movement. MMA leagues banned the clothing company from endorsing fighters in 2010.

In a letter posted on Celtic Gladiator's facebook page, the Fin, whose career in the 'cage' has totalled 27 wins and 12 losses, defended himself vehemently, claiming he is not a member of any fascist or Nazi organisation. (5)

However, a series of pictures have emerged from as recent as two months ago, showing him at a fascist concert in Poland, plastered in Neo-Nazi tattoos. They include one of 'Life Rune' - a symbol from the medieval Germanic alphabet representing the neo-Nazi National Alliance; and 'Blood and Honour' - the Hitler Youth slogan and name given to the Nuremberg race laws in 1935.(6)
MMA combines five Olympic sports - boxing, wrestling, jiu-jitsu, tae kwon do and judo - with other martial arts. It has exploded in popularity amongst 18-34 year olds in the US and Europe recent years.
This is the first major international MMA event to take place in Ireland. The 'VI Day of War' contest will feature Europe's leading MMA fighter, Chechen-born Polish national Mamed Khalidov.