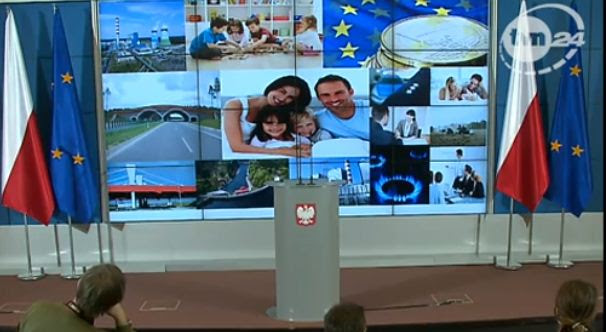 Polish Prime Minister Donald Tusk has created a media storm after an embarrassing blunder at his  2013 – Year of the Polish Family press conference on Thursday. The photograph of the Irish family is centre stage at the platform where Donald Tusk launched his Year of the Family initiative on Thursday. (Image: Screengrab)


The main photo backdrop was ironically not of a smiling and happy Polish family, but rather of Irish models and their very unSlavic-looking children.

Former mayor of Warsaw and leader of the Democratic party Pawel Piskorski wrote on Twitter that the mistake was ‘a bit shameful’.

It was an awkward start to the centre-right government’s New Year efforts to curtail the country’s alarming demographic slide, which is due to see Poland’s population fall from 38 million to 32 million by 2060. In contrast, the Irish population is predicted by Eurostat to grow by 48 per cent over the coming 45 years, despite current high levels of emigration.

The photo was sourced from Wavebreak Media, a company based in Cork, founded and set up by Irish businessman Sean Prior in 2006. It employs over 20 full time and part time employees and has expanded rapidly into the international stock image market despite the economic crisis.


Measures to boost the population

Tusk’s ruling Civic Platform party recently raised the retirement age to 67 for both men and women, up from 65 and 60, respectively. It is just one of a series of measures to offset the crippling effects of poor fertility rates, mainly caused by Polish family fears about their future finances and work security, in addition to massive flows of emigration to western Europe, mainly Germany and the UK.

Others include boosting nursery construction with an additional 50 million zloty (€12 million) in funding while prolonging tax exemptions for families of three or more children.

From June 2013, maternity leave will increase from 5 months to one year, while more controversially in the mainly conservative Catholic country, IVF procedures will be compensated by the State, regardless of the marital status of couples.

Around 15,000 couples are expected to benefit over the next three years from the 100 million zloty (€24.3 million) State fund.

This latest so-called ‘photoshambles’ incident comes just days after the Conservative party website in the UK promoted what they deemed a hard-working British family –  although they actually showed either a Danish or Australian family.